Kyagulanyi gets over 60% percent of the votes, but people don’t think elections will be honest. Election Observers from the EU have not been invited.

In February of next year, elections are going to be held for the presidency and parliament of Uganda. President Yoweri Museveni and his party NRM came to power in 1986 and in the 5 elections that were held since, he was always declared the winner. In 2016 the elections were marred with irregularities, as reported by observers of the European Union. For the 2021 elections the Ugandan government has decided not to invite European Election Observers. Such an invitation is necessary for them to do their work, according to European Union official Isabel Martinho.

In most recent elections the main opposition candidate was Kizza Besigye, but he decided not to run for his party FDC. In the last 2 years a Ugandan lawyer & pop star turned politician , mostly known by his artist name of Bobi Wine, came to the spotlight. Where in the past all opposition leaders were from the same generation of Museveni, Robert Kyagulanyi , Ssentamu (his real name) is only 38 years old. This is considered an advantage to attract votes among a population that is 78% below the age of 30, which is extremely young. Other opposition candidates are Mugisha Muntu (ANT), Henry Tumukunde (UPDF), Patrick Amuriat (FDC) and a large number of independents.

The opposition suffers from random arrests by the government of Museveni and does not get access to media that is controlled by people around Museveni, limiting voters to make an informed choice. Surveys that poll political preferences are scarce, the last one that became known was in March and performed by RWI. In that poll Kizza Besigye got 17% of the votes, but he isn’t even running. A lot has changed since March, and we think independent election surveys are important for a sound election process. This is the reason why PeerReach, in collaboration with Freedom Uganda, has decided to step in.

In the past PeerReach has published various analyses of the Twitter population (references at the bottom), now it’s polling the people of Uganda through Whatsapp.

The survey was held from October 1st to October 27th by a team of 3 people with mixed political preference. First we constructed 12000 fully random telephone numbers. Among those 12000 numbers were some 1200 people that were found in the Whatsapp database, and we sent them a message asking them for their availability for some questions. There were 304 responses. We then asked their age, home district and who they would vote for. Respondents happily gave their personal details but were reluctant to share their political preference. Asked if it’s dangerous to share their preference, many confirmed this.

We also discovered that people were more willing to respond if you mentioned the names the candidates first, so that’s what we did. Still, we found that we needed to build trust with the respondents before they gave an answer. Some video called us up to verify who we are, some asked us to send a picture. The fact that we operate from outside of Uganda made it easier to convince people we work independently. The fear of potential consequences for sharing their preference is a likely reason why surveys in the past have turned out to be inaccurate.

Robert Kyagulanyi receives 61% of the votes with a standard deviation of 5%. The probability of him acquiring more than half of the votes is 97.5% (in scientific terms: the p-value is 0.025, which means it’s scientifically significant).

Kyagulanyi voters talked very enthusiastically about their candidate and shared videos and other marketing material.

34% of the votes were for Museveni, also with a standard deviation of 5%.

Mugisha Muntu receives almost 3.5% of the votes, but with a considerable margin of error of 2%. Asked for a motivation respondents said:

Other candidates received 1.5% of the votes. 16% of the respondents indicated they would not vote, 11% were undecided and 3% wouldn’t share with us.

Consistent support among gender and area.

Although only a small majority of the Whatsapp accounts we used were male, among our respondents two thirds were male. However, if we compare results among males versus results among women, we find that Kyagulanyi received about 60% of the votes among both genders.

The average age of the respondents was 30 years. Below 35, a huge majority supports Kyagulanyi, above 35 a small majority of our sample supports Museveni.

Most Ugandans don’t think elections will be honest

We asked our respondents if they expect elections to be honest. 58% indicated No, 35% said Yes, the remaining 7% didn’t know. A big majority of Kyagulanyi voters don’t believe in honest elections, but also a small part of the Museveni voters.

We asked the respondents how things have changed in 5 years with respect to corruption, health care, education and their personal financial situation. Below you find the results. 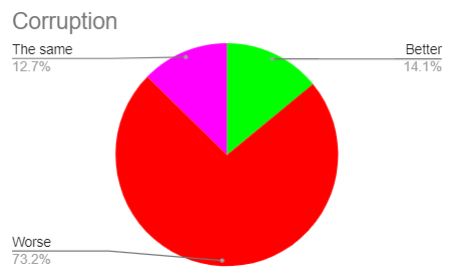 73% of our respondents think that corruption is worse. 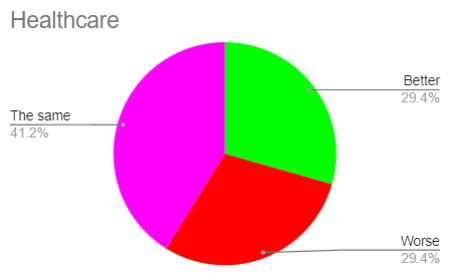 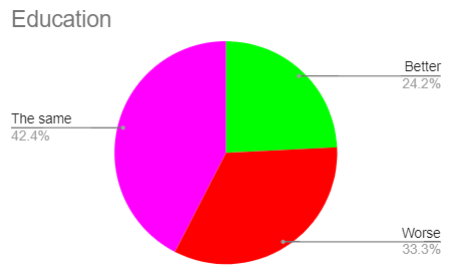 33% of respondents think that education is worse. 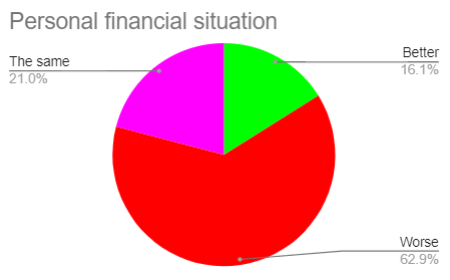 This survey shows that life in Uganda for our respondents has become more difficult in the last 5 years, and they have seen corruption increasing. Education is also worse. Health care is perceived as the same.

Although most do not expect an honest election, a big majority is planning to vote. The biggest wish of the respondents is change, and they expect to find this with their votes on new opposition leader Robert Kyagulanyi (61%). Even many of those voting Museveni (34%) are asking for change.

Statistics give a probability of 97.5% to Kyagulanyi having the majority of the votes. The support for Kyagulanyi is consistent among males and females, and those living in urban and rural areas. Most Besigye voters in 2016 are now voting Kyagulanyi. Two thirds of the Museveni voters from 2016 stick to their favorite. But the new voters, in overwhelming majority, vote for Kyagulanyi. If these young voters will show up in the polling stations then the change they are asking for might indeed be realized.

For readability some typing errors in quotes were corrected.

Nico Schoonderwoerd has a Ph.D. in physics. He published 4 scientific articles about Quantum Physics. He was co-founder of PeerReach, a social media analytics company. PeerReach research was published in various outlets.