Since April, rumors about a possible transfer of Real Madrid’s Gonzalo Higuain have been spreading throughout the world of football. The popular Argentinian striker initially was linked to Juventus, but after the Italians aligned Carlos Tevez, Arsenal coach Arsène Wenger spoke openly about his interest in the player. 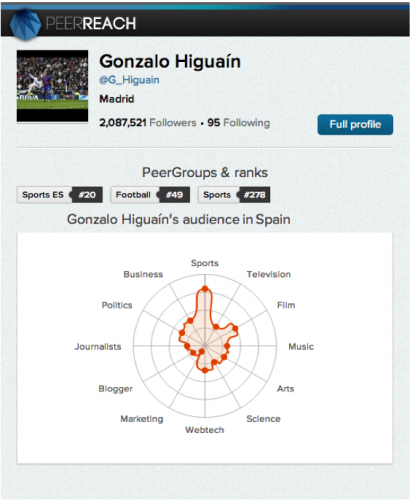 Could the rumors have an impact on the increase of Twitter followers? To answer that question, I’ve analyzed Gonzalo’s profile by segmenting out the groups he’s affecting. I was interested in two things in particular; 1) total audience composition and 2) the special peergroup we’ve created called Arsenal.

To give you an idea about @g_higuain audience on Twitter, I’ve added up some numbers regarding the followers he gained since mid April up until now. The graph below shows that his follower count grew about 600k in the last three months. Quite impressive. Especially, when you compare his profile to that of Manchester United @ManUtd, who’ve gained around 400k followers in the last two months. 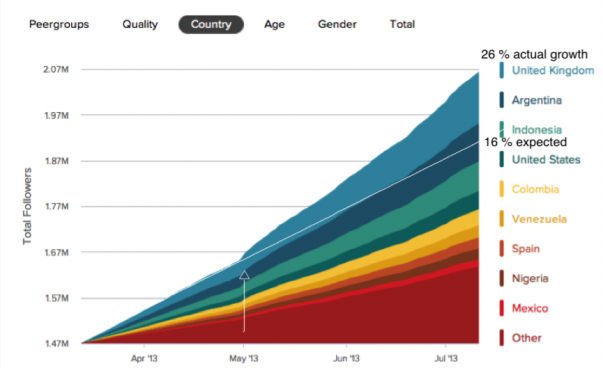 The first rumors of his transfer to Arsenal became public in May. In the graph above, you can see the actual audience increase of 26% instead of the expected 16%. 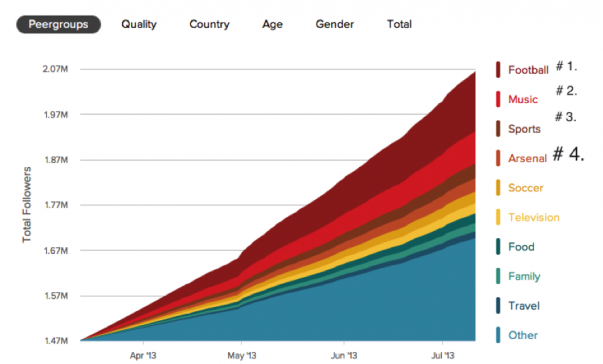 PeerReach maintains influence data for some 300 different ‘peer groups’, the name that PeerReach gives to a group of people that share a specialty or an interest. Football is an important topic on Twitter and the world’s most important football clubs have their own peer group. Arsenal is one of them. PeerReach will assign you to the Arsenal peer group if you have Arsenal in your twitter biography, if you are on twitter lists related to Arsenal, if you discuss Arsenal frequently or if you have many followers among other Arsenal peers. Our data shows that he gained many followers among this Arsenal peergroup. In the graph above, you can see that Arsenal is ranked #4 in his total audience composition.

An increase of 10% above average has occurred in Higuain’s total twitter followers within just two months. It’s viable to say that the rumors about a possible transfer of Gonzalo Higuain have contributed to the sudden increase in Twitter followers.

Do you think that Gonzalo Higuain’s 2 million followers is a lot?  Check out our most important football ranking worldwide. Below you’ll find the top 5, check out the full list here. 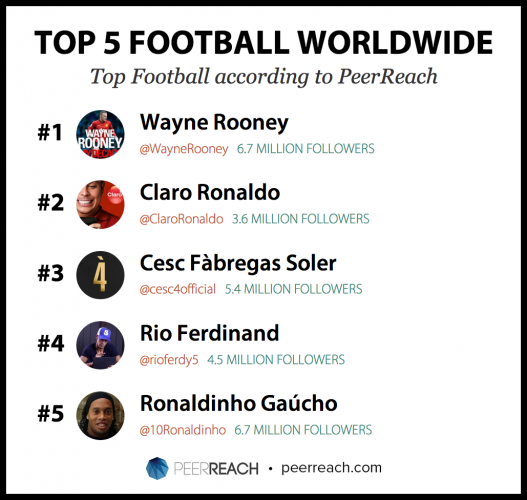